Confessions of a chocoholic 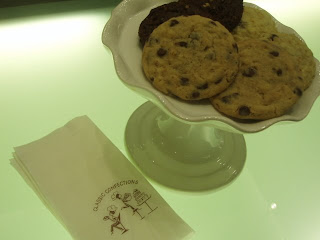 Hi. My name is Meleen and I'm a chocoholic.

When I was working in Advertising, I handled Hershey's as one of my accounts. When I first met the Client, they had a fishbowl filled with mini Hershey's chocolates on the table during our meeting. I told the Client I was a chocoholic. He just gave a polite smile, maybe thinking that I was just patronizing him. Ten minutes into the meeting, I had already gobbled seven mini- chocolate bars and was unwrapping my eighth bar. With an unbelieving look, he told me "wow, you are a chocoholic!." Told ya.

But I wrote to share about my new chocolate find. Classic Confections in Greenbelt 5.

Ever since I started working in Quezon City four years ago, I've really been out of touch with anything and everything in Makati. Not that I miss Makati that much -- the awful traffic and all -- awful is such an understatement. I keep telling people that if I probably add up the time I spent going to and from work in Makati for nine years, I must've wasted my life in traffic for at least 6 months.

Just a few weeks ago, one of my sisters and I visited Classic Confections. I've heard so much about CC in several food blogs so I decided to do some sister bonding and get some cocoa rush at the same time. I admit, I was a bit disappointed when I found out that CC only served desserts. I hadn't had dinner yet but since I was already there and didn't want to move to another location, I opted to just have cookies and coffee while my sister opted for some Hot Chocolate.

I wasn't able to taste my sister's hot chocolate but from the look on her face when she first sipped from her delicate little cup, it was a drink worth going back for. The cookies were ok, not too sweet and just the right fudgy-crumbly feel.

While waiting for my cookies, what also caught my attention were the sugar cookies on display. I decided to buy the flipflop design for our youngest sister and a soccer ball cookie for my son. But because my son decided to postpone eating the cookie the next day, his dad beat him to it. Awww. 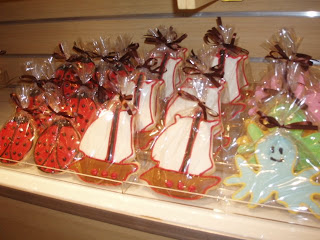 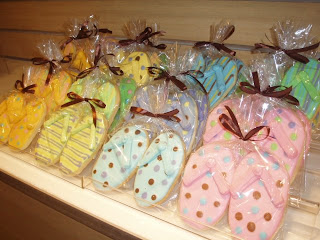 Since I had read so much about CC's Nono's Chocolate Oblivion, I bought a petite version to try at home. One of these days, I'll try Meline's Chocolate Cake as well -- just because its name sounds like mine. Haha. 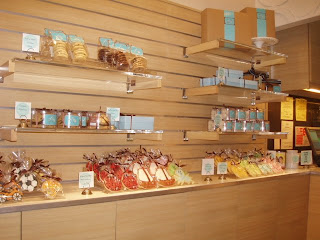 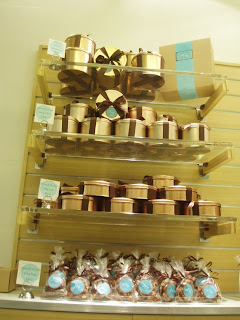 If you have a chocolate-themed wedding or would just like to give away something to munch on rather than a keepsake that might just be one of those "dust-gatherers," you might want to visit Classic Confections and take a look at goodies that you might like as your souvenirs. A little chocolate never hurt anyone...uh, unless you're allergic to chocolate. I'm so glad I'm not!

Posted by Meleen Carlos at 9:53 PM No comments: